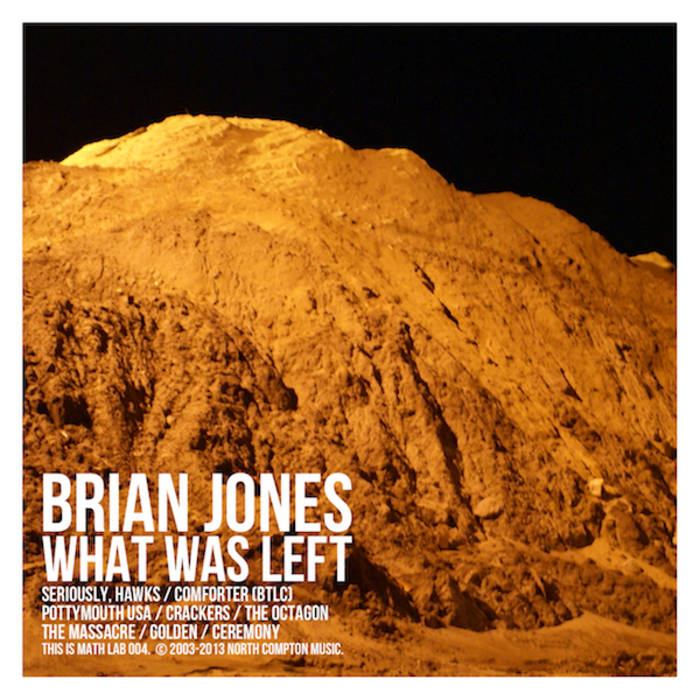 Brian Jones was a failure. If it hadn’t been, you wouldn't be reading this and you’d be hearing these songs differently, as part of a proper release, an album I’d hope. But Brian Jones never made a third album. So instead, you get this.

As I’m writing this, “Seriously, Hawks” is nearly 10 years old. It was written in October 2003 in what was the BJ practice space/my bedroom in a basement on S. Lucas Street, Iowa City. It was demoed at least 3 times before we came to the version on this recording. To me, “Seriously, Hawks” is the song I most want people to remember BJ for and it still breaks my heart a little that it never got a proper release on an album.

“Comforter” started out as a demo Zac recorded at home called “Bleep.” I made him burn it to CD for me even though I don’t think he really meant for anyone else to hear it. For a long time it was called “Beach Towels and Lawn Chairs,” a name I could not loathe more (thanks, Mike Schulte!). I renamed it for this collection because I wrote most of the words and also because fuck you, Mike Schulte.

AK named “Pottymouth USA” and I think it’s about the best title for a song ever. This was a crowd favorite towards the end of BJ and I think if it had been included on a final record it would have been a secret jam, one of those album cuts that you love but never hear on the radio.

“Crackers” was a tough song for us because we all really liked it but we could never nail down a vocal part or words that worked. I still love this song for its more upbeat tone and that cool extended outro by AK.

I think “The Octagon” was the last thing Brian Jones ever wrote. Also one of the shortest songs. The recording included here is not the final song, more like a weird remix that Zac made from a practice session. The real ending of “The Octagon” is one of my favorite little bits of any BJ material but it wasn’t perfected until the reunion shows in 2009 so no there’s no decent recording. Sorry, jerks.

There’s really no reason to include “The Massacre” here. It was never a real song, just a thing Zac, Mike and AK jammed out in the studio one day. But I like it, so it here it is.

“Ceremony” was the first “new” song that BJ played after the Seriously. songs and it really felt like an important thing. “Ceremony” wasn’t just New Order’s song or BJ’s song, it was everyone’s song. Some of my happiest memories from those days is being smashed in a throng of people I loved and some I don’t even know, all of them shouting out the words to this song. It still feels relevant to me, it still resonates.

These songs embody many things for me. And let’s be clear: this isn’t how we wanted you to know these songs. But we DID want you to know them and so this is what you get. They were the best things we’d ever been a part of (and maybe still are), they were an indicator that we could get better, that we could prove people wrong. They are heartbreakers, reminders of how some things just fall apart. They still sting me, they still thrill me, they still scare me and still disappoint me. I hope they do all of these things for you, too.

Brian Jones was a rock band. This is what was left.
-Andrew Cahak, May 2013 Minneapolis, MN

BRIAN JONES was a rock band from Cedar Rapids, IA. They played many shows, recorded two albums and a handful of demos and then broke up.

Bandcamp Daily  your guide to the world of Bandcamp